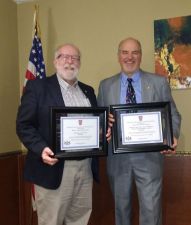 Ackerman was recognized for his concept and design for a water harvesting and purification system that received a U.S. patent last year. A resident of Hazle Township, Ackerman is president of Twin Oaks Water Systems, Inc., also located in Hazle Township. His RainMaker concept can produce potable water from unconventional sources ranging from hypersaline product water from oil and gas production to abandoned mine water to virtually any polluted water.

Ackerman has a Bachelor of Science degree in the Earth Sciences with an emphasis in Geology from the Pennsylvania State University. He is licensed in the Commonwealth of Pennsylvania as a professional engineer since 1981 and professional geologist since 1995.

His professional career has spanned more than 40 years in the environmental engineering field, starting as an environmental engineer for Hazleton Pumps and progressing to various roles as a consultant in private practice as well as the operations manager for CAN DO, Inc., before founding Twin Oaks Water Systems, Inc.

Ackerman has received multiple awards over the years including the 1986 ASCE Zone 1 Daniel Mead Prize for Younger Members, the 2017 ASCE Innovation Contest Award for “Best Value in Green Engineering” and the 2018 Lehigh Valley Section “Engineer of the Year” from the ASCE. He was also recognized as “Young Engineer of the Year” by the Coal Division SME/AIME in 1983 and by the Pennsylvania Society of Professional Engineers in 1986, along with “Engineer of the Year” by the Luzerne Chapter of PSPE in 1993. He holds the title of Diplomate of Environmental Engineering since 1989, being board certified by AAEES, and was also named a Fellow of the National Society of Professional Engineers in 2005. Ackerman owns several patents and has published numerous papers in national and international journals.

Giving back personally and professionally is paramount to Ackerman. He has served in different leadership roles in several professional and technical associations, including ASCE, PSPE/NSPE, PADEP, AAEES and AAES, and is currently finishing his fifth term as chairman of the Penn-Anthracite Section, SME/AIME.

He has mentored and developed future engineers through STEM outreach programs at various high schools and the ethics programs at Wilkes University and has been a long-time volunteer for the MATHCOUNTS program, chairing the committee from 1987 to 1999.

Ackerman serves on the Board of the Pax in Terra Foundation and participates in the Greater Hazleton Empty Bowls program founded by his wife, Margi, along with other community organizations.

He is married with two children, Matthew and Rachel.

Poplawski, P.E., F.NSPE, was recognized for organizing the “Order of the Engineer” ceremony for the Chapter and Wilkes University engineering students eleven years ago and for continuing to conduct the ceremony each year since.

Poplawski earned a Bachelor of Science degree in Civil Engineering from the Pennsylvania State University in 1973. He has been a licensed professional engineer in the Commonwealth of Pennsylvania since 1978.

His professional career has spanned more than 46 years in civil engineering design and construction. Over the last 32 years, Poplawski has been responsible for the completion of all civil and site engineering projects designed by the A+E Group, Inc., a multi-discipline architectural and engineering design firm located in Plains Township. He has completed hundreds of projects that include land developments, subdivisions, utility line extensions, roadway construction and municipal engineering duties. He has worked on projects for dozens of private and public sector clients.

A member of NSPE/PSPE since 1981, he was Luzerne County Chapter president twice, in 1990-91 and 1997-98. He served as the chapter’s state director for ten years from 1994 to 2004. He has been an active participant in all chapter activities, including chair of the MATHCOUNTS and Engineers’ Week committees, and a variety of other chapter duties. In 1993 and 2006, he was the recipient of the Luzerne County Chapter Engineer of the Year Award and in 1998 and in 2003, he received the Chapter Distinguished Service Award.

Poplawski served on the PSPE State Executive Committee for seven years from 2004 to 2011, culminating with his state presidency in 2009-2010.

His activities have not been limited to only the engineering profession. From 1981 to 2014, he was a member of the Kingston Shade Tree Commission, serving as the chairman for 30 years. He was also involved with youth sports in the Kingston community for 20 years, having coached dozens of baseball, football, basketball and soccer teams. He was president of the Kingston Little League for four years.

Poplawski is a lector at both St. Jude Church and St. Ignatius Church and is a member and past president of the St. Ignatius Parish’s Holy Name Society. He is also a member of the Knights of Columbus.

He and his wife, Pearleen, have been happily married for 46 years. They are the proud parents of two sons, Kevin, a doctor of physical therapy, and Scott, an accountant, and one daughter, Amy L. Daiute, P.E., who is also an active PSPE member, serving as the Keystone Northeast Chapter’s secretary, president, and state director.